Seismic isolation is one of the most effective strategy to protect critical facilities including Nuclear Power Plants (NPPs) from the damaging effects of horizontal earthquake ground shaking. However, the behavior of the seismic isolation system under extreme earthquakes is not well understood and of significant safety concern. Recent research has focused on addressing the potential for impact of the isolated structure to the stop or moat wall after exceeding its clearance displacement limit. A moat wall model of the scale required for NPP applications was developed based on detailed simulations and previous experimental research. Simulation results indicate significant penetration into the moat wall is possible and the resulting increase in displacement demands on the isolation system should be considered in design. 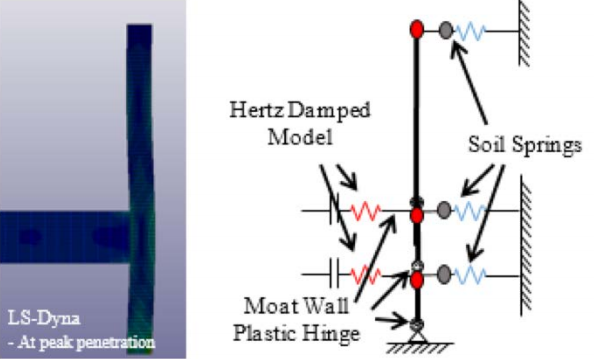 In older cross-bay bridges, submerged piles could experience significant structural deteriorations caused by the corrosion of the reinforcing steel and the cracking and spalling of the concrete after long-term exposure to the sea water. During a strong earthquake, these piles could be subjected to very high tension and compression in addition to lateral forces, all transmitted from the bridge pier supported by the pile group. Compounded by the fact that these piles were designed with older standards, their performance under extreme seismic events has been questioned. Little information is available on the shear capacity and failure mechanism of RC members subjected to lateral forces and high axial tension at the same time. In a project supported by Caltrans, a study has been carried out in the Powell Structural Engineering Laboratories of UC San Diego to evaluate the performance of prestressed concrete piles under alternate high axial tension and compression as the pile undergoes cyclic lateral displacements. The subject bridge was constructed in the sixties. In this research, five 0.78-scale models of a representative Type-II pile are tested. They represent an as- built pile as well as piles with different degrees of corrosion damage. A beam-column model that captures the interaction of the axial, flexural and shear responses of an RC pile has been developed to analyze the behavior of a pile group as well as individual piles. The model is being validated by the test data. The study will determine whether the piles meet the target seismic safety requirements. Data obtained from this study can also be used to improve design specifications for prestressed concrete piles in general. 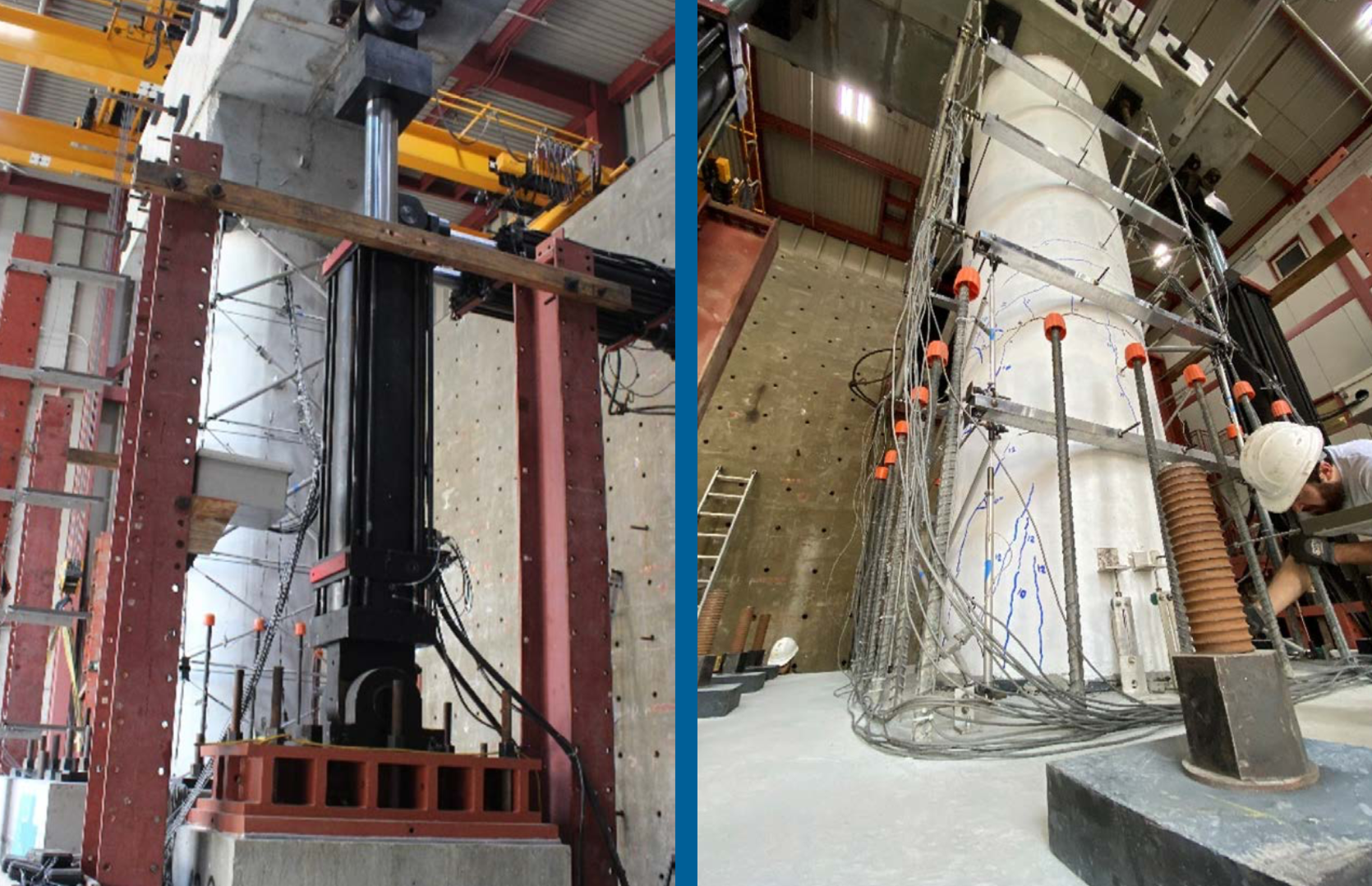 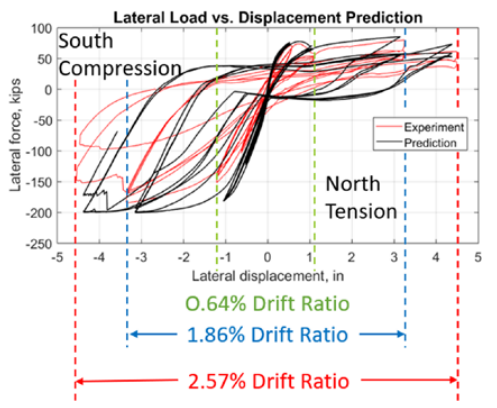 The ability of pentamode lattices to have both very soft and very stiff deformation modes suggests they are potentially suitable for use as seismic isolators. Unlike most other seismic isolators, where the response depends entirely on the properties of the materials used, the response of pentamode lattices depends mostly on their geometry. This is advantageous, as their response can be easily tuned by altering the geometry to control the vertical and horizontal stiffness for each application.

I-shaped steel plate girders with vertical stiffeners in the web are widely used for bridge construction. For economy, the web plate is very thin relative to the depth of the girder. Unlike typical rolled I-shape members, these girders rely on the development of tension-field action (TFA) after the web buckles to resist shear. Both the bridge design code (AASHTO Specifications) and building design code (AISC Specification) provide equations for calculating design shear that takes advantage of TFA in the past half century. But these equations are applicable for interior, but not end, panels. When performing evaluation of existing steel girder bridges in California, Caltrans engineer realized that end panels quite often do not have a sufficient shear strength in the end panels. Thus, Caltrans funded a research at UCSD to evaluate if end panels can also benefit from TFA such that expensive retrofit is unnecessary.

A total of eight large-size plate girders were tested in the Powell Laboratory. A TFA model was established based on the observed failure mode (see Figure 4), from which a shear strength equation that reflects the partial TFA was developed based on plastic analysis:

This shear strength is also being considered for adoption in the 2022 edition of AISC Specification for Structural Steel Building. 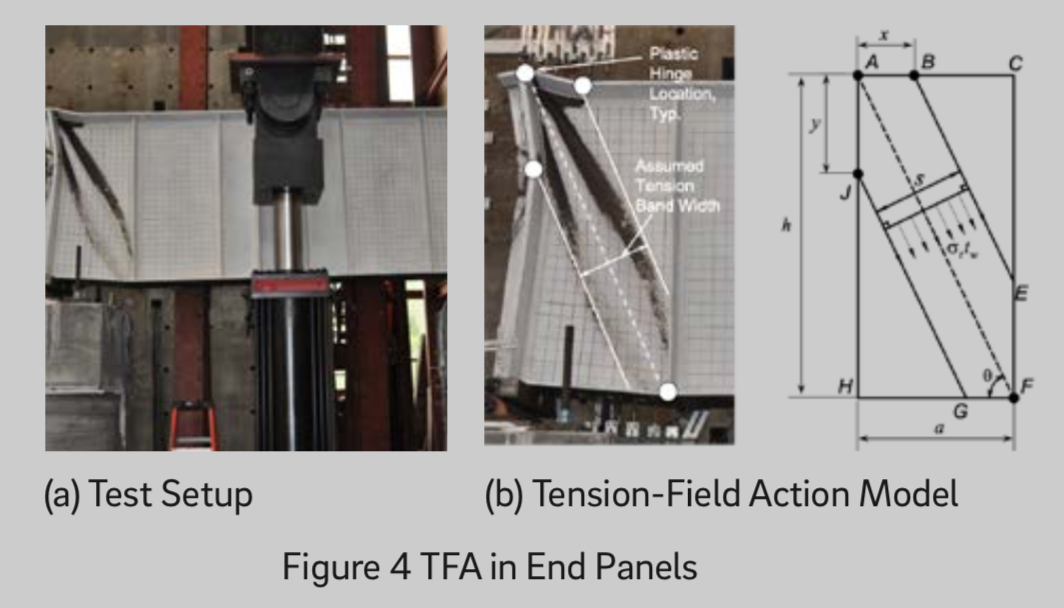 Continuity plates (i.e., horizontal stiffeners) have long been understood in playing an important role in stiffening the beam flange-to-column flange connection in an SMF. The 1994 Northridge, California earthquake resulted in brittle fractures at the complete-joint-penetration (CJP) weld adjoining the beam flanges to the column. Significant research effort conducted after the earthquake resulted in moment connection design requirements contained in AISC 341 and AISC 358 (Prequalified Connections for Special and Intermediate Steel Moment Frames for Seismic Applications). These standards stipulate that continuity plates must match those of specimens tested in the past and, thus, expensive CJP welds are required to connect the continuity plate to column flanges. In this research project, sponsored by the American Institute of Steel Construction, we performed full-scale cyclic testing of more than ten beam-column subassembly tests to develop an alternate weld detail and a design procedure that allow the designer to use more economical fillet welds to replace CJP for such application.

Figure 3 shows the test setup for 2-sided moment connection testing. Eleven specimens that used fillet welds with the proposed design procedure met the acceptance criteria in AISC 341. Based on both testing and extensive finite element simulation, we proposed that continuity plates be permitted to be welded to column flanges using a pair of fillet welds with a weld size at least equal to 75% of the thickness of the continuity plate. In addition, we proposed a limiting width- thickness ratio for continuity plate design based on the observed buckling in this research program. These proposed requirements are been considered for inclusion in the 2022 edition of AISC 341. 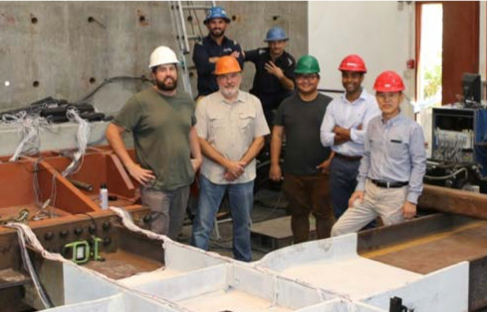 Deep wide-flange columns are routinely used for the construction of multistory Special Moment Frames (SMF) in the United States because deep column sections are efficient to meet the story drift requirement specified in the building code. Although AISC Seismic Provisions for Structural Steel Buildings (AISC 341) require a check of strong column-weak beam condition, plastic hinging at column base is expected. To address the response and design of such columns, National Institute of Standards and Technology sponsored a research project at UCSD. A total of 48 deep columns were cyclically tested by using a shake table facility at the Structural Response Modification Device (SRMD) Laboratory.

Test results showed that the interaction between web and flange local buckling caused significant strength degradation and axial shortening. While some columns developed plastic hinges at member ends in the plane of bending, out-of-plane buckling as shown in Figure 1 was also observed in many column specimens. Based on results from both testing and finite element simulation, more stringent width-thickness limiting ratios ( lhd for SMF and   for IMF) have been proposed (see Figure 2). These recommendations are been considered by the AISC Specifications Committee for inclusion in the 2022 edition of AISC 341. 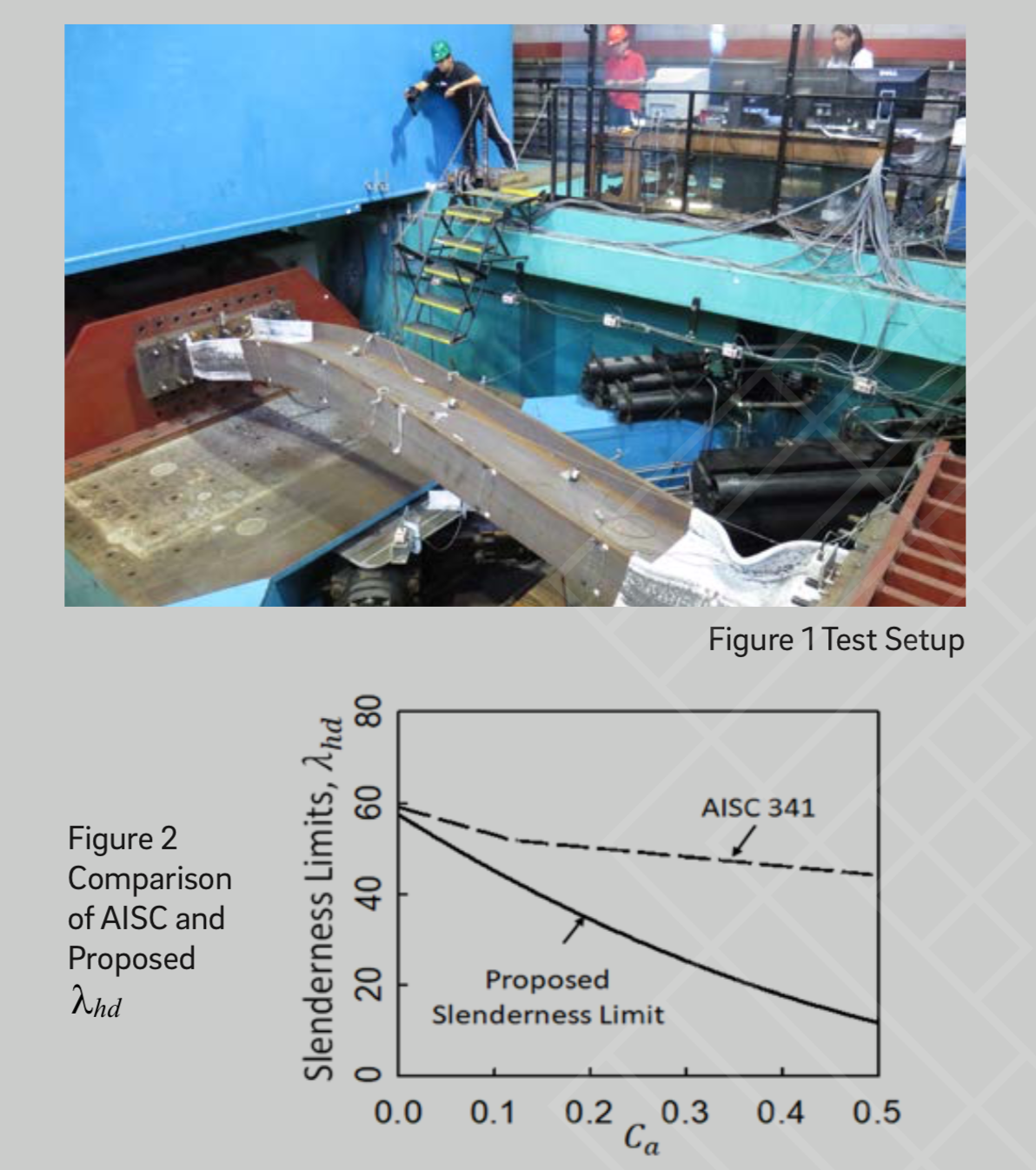